Of steel, space and late capital

Posted: February 17, 2015 | Author: aschifani | Filed under: Wandering in the city | Leave a comment 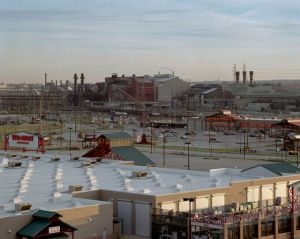 Driving into Cleveland on 71 North, you might happen to take the Quigley Road exit. As you head down the hill and toward West 7th St. you will be confronted by two, side by side and asymmetrically striking, architectural disasters. These are not the vistas of Cleveland’s sometimes impressive urban landscape any seeking to sell the city would offer. The first is the sprawling, drab, junkspace* that calls itself “Steelyard Commons.” Housing a Home Depot, a Target, a Walmart, and a number of unremarkable and similar big and not-so-big box stores, this shopping mecca/dystopia (like literally countless others of its ilk) is, at best, a convenient stop for locals who need to pick something up on the cheap. At worst, it is an eyesore, an annoyance, and a terrible reminder of the increasingly global homogeneity of commercial space. Just next door to Steelyard Commons is, in fact, a still-functioning steel mill. This is our second disaster (though, it is perhaps more aesthetically pleasing, thanks to a kind of abysmal, hipster nostalgia). One of the last of its kind, it poses a threatening, anachronistic, theatrical counter to the “commons” to its west.

When I first drove into Cleveland I ignored the ignoble shopping center but was awed by the behemoth mill, even charmed by it. The reason folks like me (educated, cultured, relatively ‘upper’ in the class structure) can be wowed by such mammoth markers of a bygone industrial age is because they indicate an economy that no longer holds real sway and because they seem to anchor us to a material world we fear may be losing its purchase on what we experience as reality. The mill is a marker of a vanished boom of not just industry but of politics: once, says the steel mill, there existed a viable labor movement, the possibility of a living wage, and accessibility to middle and working class status.  There were things to be made that required materials and hands to shape them. The wild abstractions of the contemporary global economy must have seemed to many, in the heyday of industry, an impossible future.

The contrast of these two ‘steelyards’ encourages an aestheticizing of the age of Ford and Taylor, of blue collar culture, and of the things that workers, we’re told, were well paid to make. The monster mill, at the very least, demands a kind of attention the dull, flat banality of the strip mall does not. I have to admit, I swooned. So far from Los Angeles, I thought, so close to real production.

Of course the glory days of industry were not, in fact, those in which workers, industrial or otherwise, occupied the most stable position.** And what ground they gained, what access they had to upward mobility and middle class comforts was hard won. None of this is even to mention the environmental costs of industry–costs we are only now really beginning to pay.

And while Steelyard Commons (which is by no means a commons of any sort) has become the more appalling, but also the more accurate and ubiquitous indicator of the state of things in Cleveland, the steel mill still rumbles in the neighborhood nearby. Affective (and precarious) labor of the sort done by the Walmart greeter may be winning the day (and making the rungs of the class ladder more slippery than ever), but there are workers of all sorts, everywhere, who still build, make and shape. And affective labor is labor. Make no mistake about it.

I want to suggest that in Cleveland, the side-by-side existence of these two not-quite dichotomous forms of labor (and the troubling architecture that houses it) may offer to the city’s residents and passersby a kind of critical opening.

This kind of remarkable juxtaposition, in fact, happens more in the rust belt, at least in the U.S., than it does in the world’s global capitals. And the story Cleveland is telling about the U.S. and, likely, the global economy, is one that scholars, activists, architects, designers, citizens and immigrants of all sorts should not ignore.

If you look, as you literally can, at Cleveland’s past (the steel mill) and its present (Steelyard Commons), you will feel pretty hopeless. The old model failed, the new model is deeply invested in an economy that seems forever insistent on increasing the gap between the rich and the poor as it whittles down the former to a tiny few. Neither the industrial nor the service models have been good to people of color or women. But, miraculously, what Cleveland has is its failure. Steelyard Commons points, without knowing that it does so, to the trouble of the industrial economy indicated by the big, smoking, impossible mill still burning to its east. And the misery the shopping center, itself, indicates isn’t lost on workers (or on the hipsters and city boosters who would prefer a very different sort of architecture by which to careen on the highway). Steelyard Commons, by signaling its neighbor, also accidentally reminds us, if we look harder than simply at its structure, that bubbles burst. That you cannot bank, indeed, on any totalizing view of what it is we do when we work, or what it is we live in when we live in a city.

That Steelyard Commons pretends so audaciously to belong to the common may seem at first to indicate the foreclosure of alternative possible futures. But what if instead of nodding our heads in that direction, sorry that we haven’t a salve to our savage desire for a commons that might actually belong to all of us, we actually offer material alternatives? What if in the swaths of abandoned spaces and infrastructure, vacant land and empty buildings, we build to suit for neither economy, but instead for us? Weekend roller rinks in the flats. Art-trading fairs in old book factories. Discoballs dangling above dance parties on underutilized bridges.

The Cleveland Urban Design Collaborative (among others) has offered indeed some of these very same solutions through their Pop Up City interventions, but I want more. I want a built environment that seeks a future more equitable, more sustainable than the one we seem to be hurtling toward. Perhaps we cannot yet point to the developer willing to add a third sort of structure, somewhere between the two steelyards, that looks further into the future than either. But if we don’t ask for it, it will never appear.

A recent article published on alternet echoed a sentiment to which I strongly hold:  “Struggling US cities of the rust belt and heartland lack the investment of coastal contemporaries, but have in turn been spared the rapid displacement of hipster economics. Buffered by their eternal uncoolness, these slow-changing cities have a chance to make better choices – choices that value the lives of people over the aesthetics of place.” If you’ve read this blog, you will know that I’ve been saying more or less (despite its coolness, though, rather than because of its uncoolness) the same thing about Cleveland since I moved here. Cleveland does not have to do what it did in the past. It doesn’t have to keep doing what it is now.

I want to sail into Cleveland on 71, one day, and see, growing from the ruins of the industrial and the service economies, a different model of urban building. I want a material manifestation of that imagined utopia that is truly common. Too much to ask? Perhaps. But I am asking anyway.

*See the compelling and sometimes polemic Rem Koolhaas’s exceptional essay, in which he coins the term: Junkspace.

**For a brief history of labor movements in Cleveland, check this out.