← On Weird Science in Paris
Play of the Day →

Of Parisian Hipster Glory and the Best Day Ever 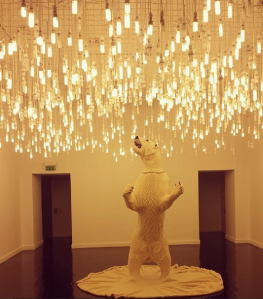 I will herein recall to you one of the best days of my life:

In a small, rented flat in the 3rd arrondissement we awoke, thanks to jet lag, in the early morning hours before the sun rose. We walked down the block to the Carrefour grocery to pick up some basics: fresh grapefruit juice, real French butter, yogurt, coffee, wine. We bought two croissants at the boulangerie next door to the flat and spent the morning nibbling and sipping, considering the day’s plan.

We roamed around the 10th, near the neighborhood where I once briefly lived. I had the distinct pleasure of not being lost in the city and the strange sense that, now six years since my departure, Paris is both very much the same and still very much a city in transformation.

After the requisite mid-morning coffee at a brasserie nearby, we wandered to the Musée de la Chasse et de la Nature. This museum is incredible. In addition to an enormous collection of taxidermy, antique hunting rifles and cabinet displays devoted to different sorts of prey and their scat, there is too a handful of contemporary art installations (my favorite of which is pictured above). The only place I could potentially liken it to that I know of elsewhere in the world is the equally astounding Museum of Jurassic Technology in Los Angeles.

Post-museum exploration, we picked up some haricot vert and poulet rôti for lunch and (again, jet lag) took a nap. We passed the early evening people-watching over a half bottle of wine like any good Parisians would and then headed for a late dinner at Bones.

The too-many-courses-to-count meal that ensued was perhaps the best I have ever eaten. Some highlights: uni toast, duck heart with horseradish, seared scallops, some sort of roasted foul… Paired with a bottle of red Touraine La Tesnière and served to us by extremely attractive hipster waiters, the food at Bones was legitimately glorious.

Basically, the whole damn day was swoon-inducing. If I could snag one of those bearded, flannel-clad waiters as my mate, I would renounce my U.S. citizenship and never, ever leave Paris again.