On the Political Affordances of Outdoor Drinking 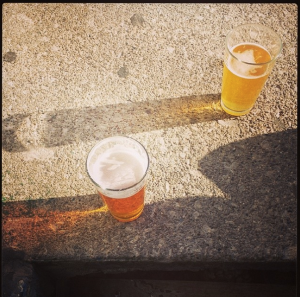 Cleveland understands the value of drinking out of doors. Perhaps this has something to do with the extremity of the city’s winter weather. When spring finally comes with summer quick in pursuit, people feel an intense compulsion to occupy the spaces of their worlds that were long blanketed in snow and utterly uninhabitable.

There are few pleasures in life as entrancing as sitting somewhere outside, sipping something cold and alcoholic. This quotidian joy, if you happen to be itinerant me (or pretty much anybody else) is buoyed by good company and good conversation. Since the weather finally gave poor, pallid Clevelanders a break, I have spent the majority of my porch-drinking time talking about love and politics.

These are heady subjects, you might say, for casual social gatherings. But that is the beauty of the porch: the warm breezes and kind light mitigate what might otherwise prove antagonistic engagements. It’s so much easier to disagree, to debate, to all out stand opposed to those sitting across the table from you in such scenarios.

Don’t believe me? Well, the President of the United States does. So take that.

The point here is simply this: the environments in which we confront each other matter. The physical landscapes, the light, the architecture, the sound, the smell–all the textures that compose a moment–color our capacity to understand one another.

Perhaps this is no radical suggestion, but it bears outlining nonetheless. Our most productive, meaningful, even epiphanic insights about ourselves and the strange networks we inhabit are often connected to where they occur. And perhaps our grim political exchanges, both local and global, might be in need of alternative meeting grounds.

Besides: who doesn’t swoon at the thought of an afternoon, even with an enemy or two in tow, cooling the seasonal sun with a beer and trying to figure out what on earth we’re going to do with our lives/loves/countries/cities/cats?*

As a small token of my belief in the power of place to change the world and the self, I give you a list of just a few of my favorite neighborhood patios/porches/yards:

My backyard. Known by my landlord and others as ‘chateau ghetto,’ I have a fire pit too. And often provide marshmallows for roasting.

So take someone you don’t understand outside for a drink. Because, tis the season for micropolitics.

*People worry about their cats a lot.