← Play of the Day
On Imagining Cleveland →

On becoming a Browns fan 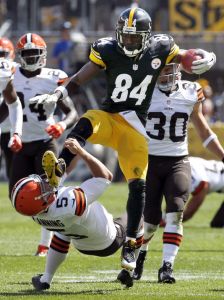 My sincerest apologies, dear readers, for my long absence. The perils and pressures of the academic job market and its accompanying existential dread have kept me away from you. The other thing that has kept me away from you is the subject of this post. I have, to the shock and dismay of many of my friends and loved ones across the country, become a Browns fan.

Before moving to Cleveland I knew nearly nothing about professional football, nor had I ever, excluding my attendance at the occasional super-bowl party (driven in large part by my intense desire to consume chicken wings and queso dip), bothered to watch the sport on television.

But Cleveland is a football city. It is populated by long-suffering, devoted, blindly faithful lovers of the Browns. And such fervor, despite abysmal evidence of the team’s inability to succeed, does much to woo the uninitiated. The sheer commitment Clevelanders are willing to offer the Browns is astounding. So astounding, in fact, that in less than a year its pull was strong enough to put me on a bar stool in front of a screen, screaming and weeping and drinking, to watch the opening game against the Browns’ long-time nemesis, the Pittsburgh Steelers.

It did not, initially, go well. As I sipped my second beer, I watched the Browns crawl into half-time down a painful 24 points. This was a familiar sort of awful for fans. Since the 1999 season, the Browns had lost 27 games to the Steelers. Cleveland’s most beloved team has also logged a painful ten years since they managed to win an opening game.

But in the second half, we (you see how bad it’s gotten… ‘we’?) pulled it together to close the Steeler’s lead. Quarterback Brian Hoyer (an Ohio boy making good) won 230 yards—this includes a glorious 9-yard touchdown to Travis Benjamin. It was beautiful.

Yes, Browns’ punter Spencer Lanning was literally kicked in the face by the Steeler’s Antonio Brown. And yes, when all was said and done, we lost: 27-30.

But for a minute, it felt like we might win. And I’ve never seen anything like the manic, if still somewhat cautious, joy that filled that bar. Never. I swooned in that second half. I was moved. I screamed. I became a Browns fan.

I think the charm of sports (though I myself have never played or followed until finding myself at that West side bar, in this odd Rust Belt metropolis) is in the way they help us tell stories about ourselves. And the story of the Browns is compelling because it seems so well-matched to the story of the city the team inhabits.

Cleveland has deeply felt the the blows of the post-industrial economy. The city was among the hardest hit by the fallout of the 2008 financial crisis. It was, long before that, devastated by the fall of industry. It, in short, has had a very hard time figuring out what it might take to win in a world that is quick to turn from the gifts it has (and has been asked) to offer.

The Browns’ history parallels the city’s own suffering. Like Cleveland, the team had its hey day. In the 50s and early 60s they were the league’s premier franchise. And then, the crash. Since the team’s last championship victory in 1964, its showing has been meager. A friend of mine told me that apparently their loosing streak is so bad as to be statistically, strikingly anomalous. It would be easier to accidentally win a championship than it would be to lose as often as the Browns have lost.

But this city loves them anyway. And so do I. Maybe because the one thing a city needs to survive the wild ups and downs of the shifting market is the same thing it needs to support a perpetually losing football team: hope. If we make different choices, if we build a future out of the stuff of our battered dreams, however implausible, maybe we might have a chance.

I am not a fan of the speculative capitalist economy. I’m not a fan of the Steelers. These negative statements share a foundation in the belief that the way things have been does not foreclose their possible futures. Change is possible. Cleveland could win.

And, if you’ve been following, they just might. The Browns’ played the Steelers again on October 12th. Final score? Browns 31, Steelers 10.

And nobody got kicked in the face.

The future, my friends, for our cities, for all of our teams, is wide, wide open.

2 Comments on “On becoming a Browns fan”